Transportation to and from Chiang Mai Airport

What is the distance from Chiang Mai Airport to the centre of Chiang Mai?

The centre of Chiang Mai, where you can find the Wat Phra Singh temple, is known as the Old City and can easily be located on the map by its square shape. The distance from Chiang Mai Airport to the Old City is only 4 kilometres / 2.5 miles and getting there takes approximately 15 minutes by car.

From CNX Airport to Chiang Mai City centre by Taxi

Travellers can travel between the airport and the city using the Chiang Mai City Bus operated by RTC (Regional Transit Cooperation). The buses, that can be recognized by their blue colour, are also known as Chiang Mai Smart Bus. Your options to get from the airport to the city are buses R3 Red and R3 Yellow. Bus R3 Red runs to Nimman and then via Tha Phae Gate 1 in the Old City back to the airport. Bus R3 Yellow takes the same route only in the opposite direction, so it stops at Tha Phae Gate 1 in the Old City first before it goes back to the airport via Nimman. Between 06.00 hours and 23.30 hours buses leave to and from the airport every 20 to 30 minutes. You can find the bus stop at the airport by exiting the terminal via ‘Door 1 Exit’.

Bus tickets cost 20 THB for a single trip, you can pay on the bus using coins. Alternatively, you can pay using a rechargeable Rabbit Card sold by CM-Transit. Travel time to the centre of Chiang Mai is 25 to 35 minutes and Chiang Mai City Bus offers a free WiFi service for you to pass the time. The two bus stations in Chiang Mai, Bus Terminal 1 and Bus Terminal 2, can be reached by transferring onto the R1 Zoo – Central Festival bus. You can make that transfer at the bus stop in the busy Huaykaew Road. Arcade Bus Terminal / Chiang Mai Bus Terminal 2 is the city’s main bus station located 4 kilometres north-east of the Old City. Please consult website CM-Transit for more information. 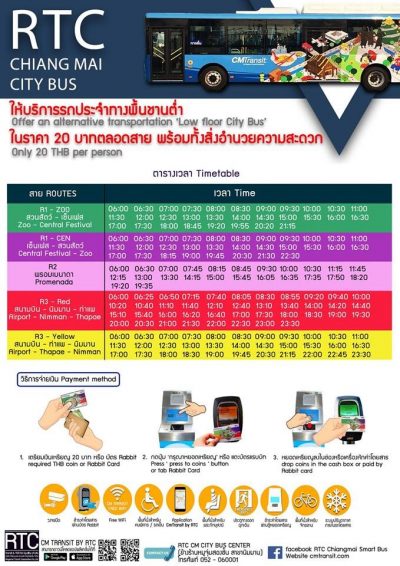 Neighbourhoods and railway station
Popular neighbourhoods, besides the Old City, are Nimman Area / Nimmanhaemin Road to the west and Chang Moi / Chang Moi Road to the east of the Old City. Shops, restaurants, bars and cafes can be found in the trendy Nimman Area, in particular on the Nimmanhaemin Road (Coffee Street) and at the complex of Chiang Mai University. Chang Moi is the sight hosting the famous markets Talat Warorot (food) and Chiang Mai Night Bazaar (souvenirs). The railway station of Chiang Mai is located east of the Ping River.

Alternative means of transportation between Chiang Mai Airport and the city: songthaew and tuk tuk

There are two alternatives that you can use to get to and from the city that are both more expensive than the bus, but less expensive than the taxi. Songthaew is the name of roofed, red pickup trucks. These shared taxis are hugely popular in Chiang Mai. Within the city, a trip with a songthaew (rot daeng/red truck) costs 30 THB per person. From the airport drivers will charge 40 THB per person. Tuk tuks are the best-known means of transportation in Thailand and you can use them to get from Chiang Mai Airport to the city. The price will be around 100 THB for two persons.

Discover the White Temple, a modern architectural masterpiece, before taking a break at the Blue Temple and exploring the chilling Black House.

Enjoy an unforgettable night out in Chiang Mai as you watch a spectacular transvestite cabaret show. Be amazed by the professional performers in dazzling costumes that you surely don't want to miss!

Explore the beauty of Chiang Mai with a waterfall trekking experience and an elephant sanctuary in one day. Interact with rescued elephants, eat a Thai lunch, and enjoy bamboo rafting in the jungle.

Visit Thailand’s highest point at Doi Inthanon National Park, above the mountains of Chiang Mai. Find tranquility at the beautiful cascades of the Sirithan and Wachiratharn waterfalls, and explore the Karen Tribe community at Sobhad Village.

Learning about and observing rescued elephants at a sanctuary. Observe elephants respectfully in quaint surroundings, and enjoy a delicious vegetarian Thai buffet lunch.

See the sunrise from the golden pagoda at Doi Suthep. Visit the Kruba Srivichai Monument and explore the 700-year-old temple of Wat U-Mong on a small-group or private half-day tour.

Learn how to cook popular Thai dishes such as Tom Yum Koong, Pad Thai, Pad Kra Prao, and the ever-popular curry in the Lanna Pavillions, surrounded by a beautiful organic farm.

Experience Chiang Mai Elephant Sanctuary on a small group tour. Learn how to care for and feed the elephants. Walk with rescued elephants through the deep jungle and enjoy Mae Wang Waterfall.

Have you visited Chiang Mai Airport lately? So far, 1 airport passenger has written an airport review about Chiang Mai Airport and gave a score of 1 out of 5. Provide other airport travellers with essential airport information and tell us about your airport experience.