Unusual runways come in different shapes and sizes; the most common materials used for runways are asphalt, concrete, bitumen, gravel and grass/sand. Most airports in Europe have runways made of asphalt or concrete, with an average length of 2.500 metres. Long and wide runways have the advantage that larger aircraft can land on them. The largest passenger aircraft in the world (Airbus A380) needs runway of at least 3.000 metres. However, it is not the material or the length that makes a runway special, but the location. Below is a list of runways (in random order) in Europe that pilots and travellers consider to be very unusual.

Barra Airport is the airport serving the Scottish island of Barra. This airport has three unusual runways that are all located on the beach. This means airplanes can only land at low tide, at high tide aircraft can’t land or take off. The airport can only be used by smaller aircrafts. Barra Airport is one of two airports worldwide with a runway on the beach. Another unusual feature is the landing procedure at night; cars parked at the airport use their lights to illuminate the runway. 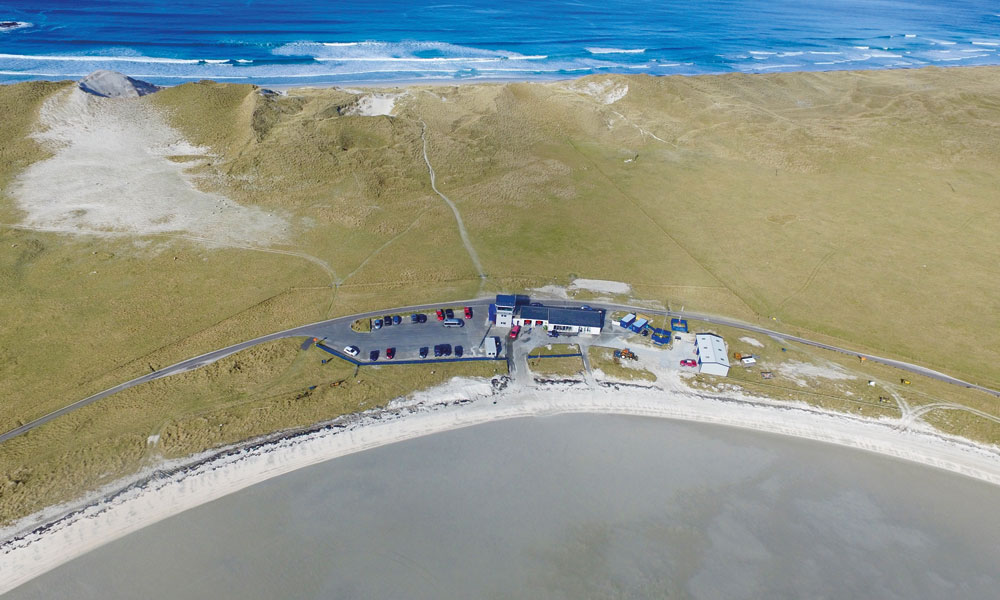 Corfu Airport is a small airport located on the Greek island of Corfu (or Kerkyra). The airport only has one but rather unusal runway, which is largely located in the sea. There is a dam at the southern end of the runway, where the pilots need to fly over at low altitude. The runway of Corfu Airport is made of asphalt and has a length of 2.373 metres. For plane spotters, it is a special place to spot aircrafts. 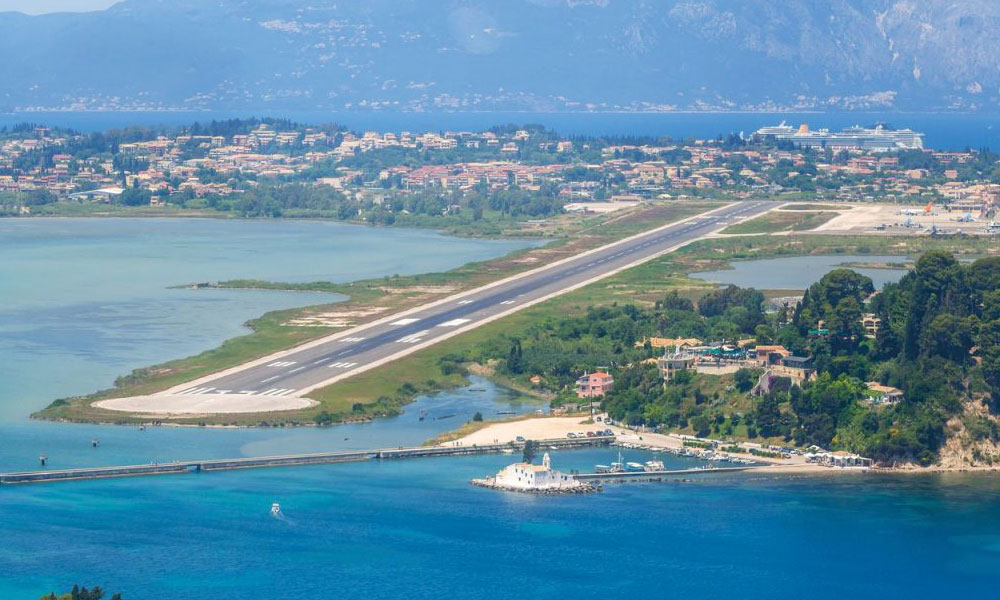 Courchevel Airport is located in the French Alps, and only has one runway. It is one of the shortest in the world with a length of 525 metres. Due to its impractical location at an altitude of 2000 metres in the mountains, half the unusual runway has a gradient of 18.5%. As a result, take-offs can only be made downhill and landings uphill, making a touch and go landing impossible. Only specially trained pilots are allowed to fly to this destination. Nowadays the airport is only used by helicopters and small Cessna’s. 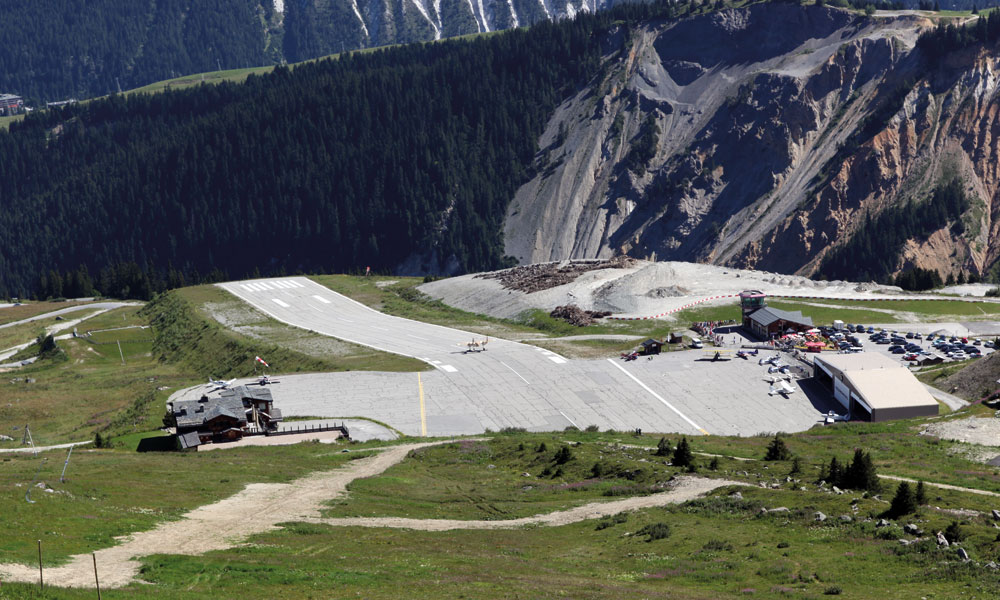 Genoa Airport is located in the port of the Italian city of Genoa. In full this airport is called Genoa Cristoforo Colombo Airport, named after the world-famous explorer Christopher Columbus. Genoa Airport is built on an artificial peninsula and has an unusual runway, made of bitumen. The length of the runway is 2.916 metres. In 2017, 19.114 aircrafts landed on or took off from this runway. 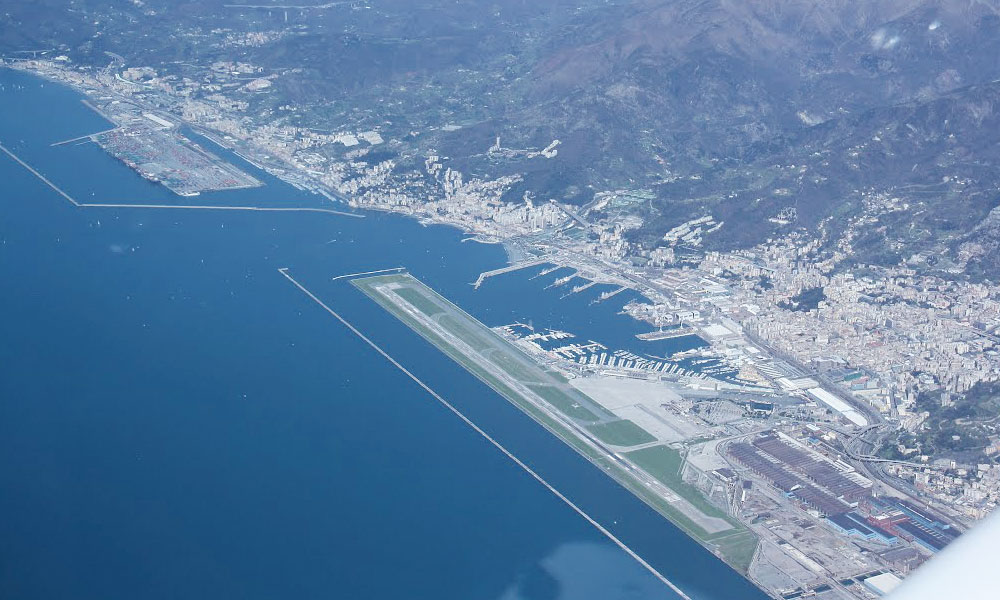 Gibraltar Airport is the airport that serves the British overseas territory of Gibraltar. This unusual runway runs parallel with the Spanish border. The length of the runway is only 1.800 metres, even though it has already been extended claiming part of the Bay of Gibraltar. Winston Churchill Avenue, the connecting road between Gibraltar and Spain and also the busiest main road of Gibraltar, intersects the airport runway. The road closes to traffic for the aircraft to pass; barrier comes down for pedestrians and cars when approaching planes are about to land or take off. 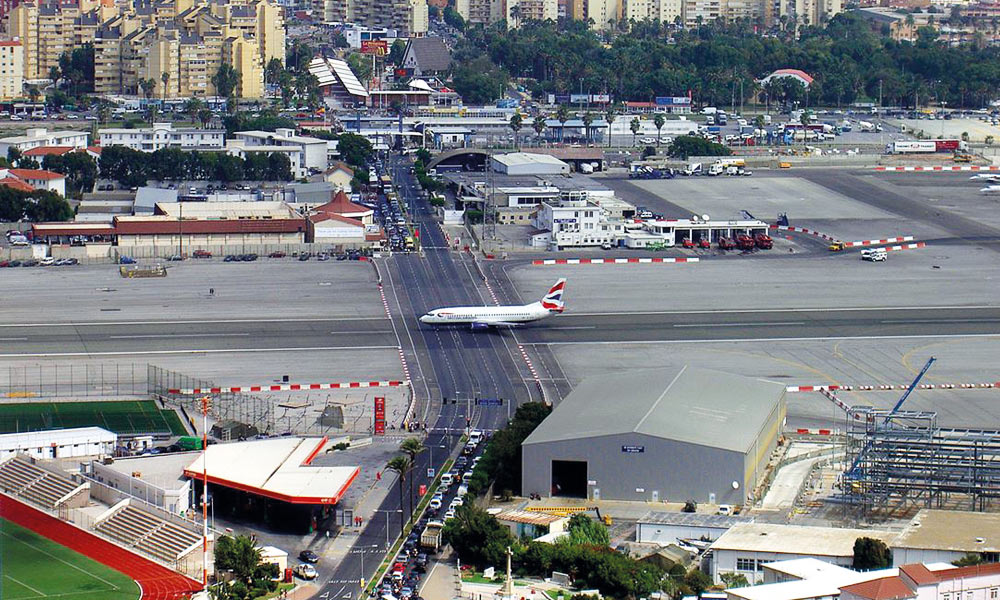 London City Airport was opened in 1987 and is now a base for British Airways. This airport is the most central airport in London and also the smallest of the six London airports in terms of size. London Southend Airport is the smallest in terms of passenger passing through per year. Because this unusual runway is only 1.508 metres long, only smaller aircrafts are allowed to conduct operations at this London business airport. 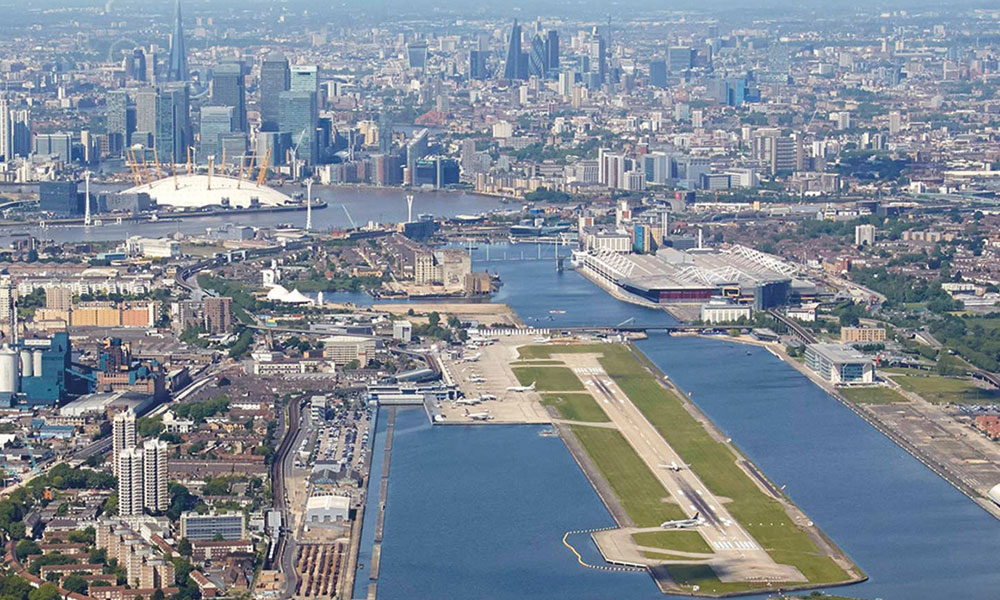 The runway of Madeira Airport on the Portuguese island of Madeira is both fascinating and dangerous. This unusual runway is located between the Atlantic Ocean and a mountain, allowing only specially trained pilots to land on Madeira. Just before landing the pilot has to make a turn to the right, in order to make a good approach. In 2000 this runway was reconstructed and extended from 1.600 metres to 2.781 metres. 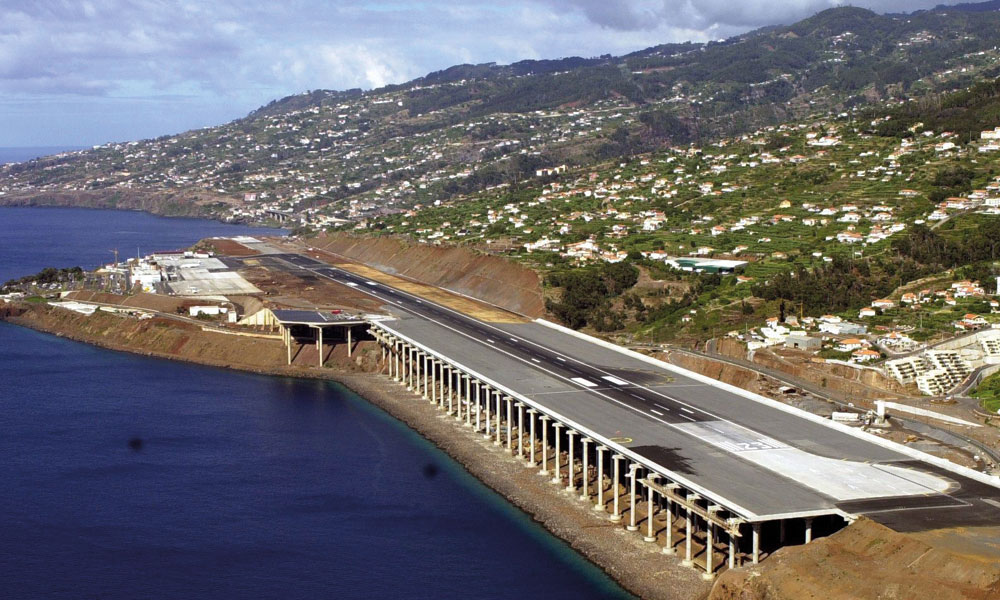 Nice Airport is located at the Côte d’Azur in the southwest of the French city of Nice. It is the third busiest airport in passenger and aircraft movements in France. The airport has two runways, which are located on an artificial peninsula. Both runways are made of asphalt, one has a length of 2.570 metres, the other is 2.960 metres long. 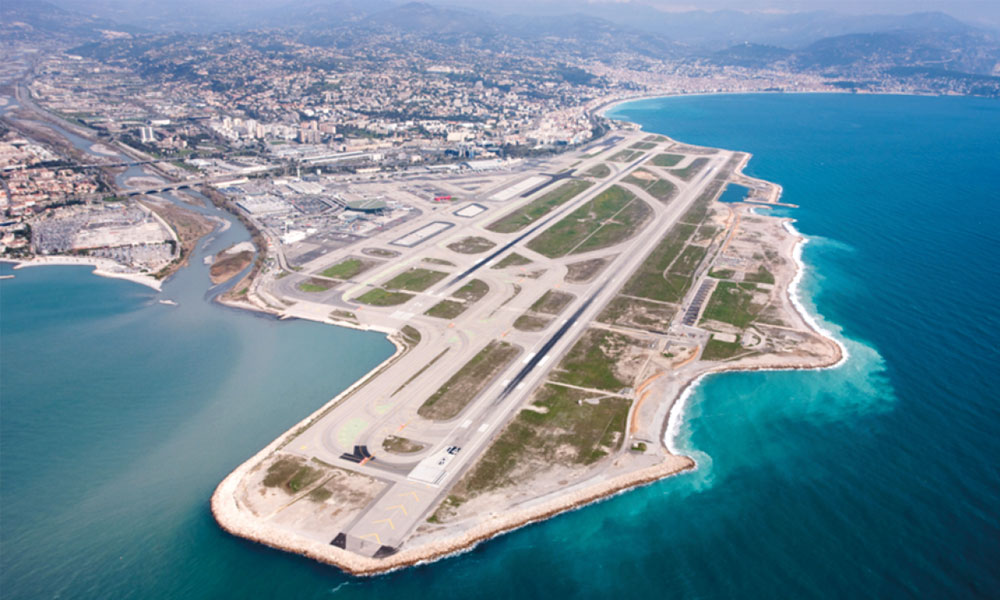 Saarbrücken Airport is located in the western part of Germany, near the French border. This airport, founded in 1964, has an unusual runway with a length of 2.000 metres made of asphalt, built on a plateau. Next to this runway there is a short grass runway where planes can land and take off. This unusual runway is only 545 metres long. Saarbrücken Airport is located at an altitude of 322 metres. 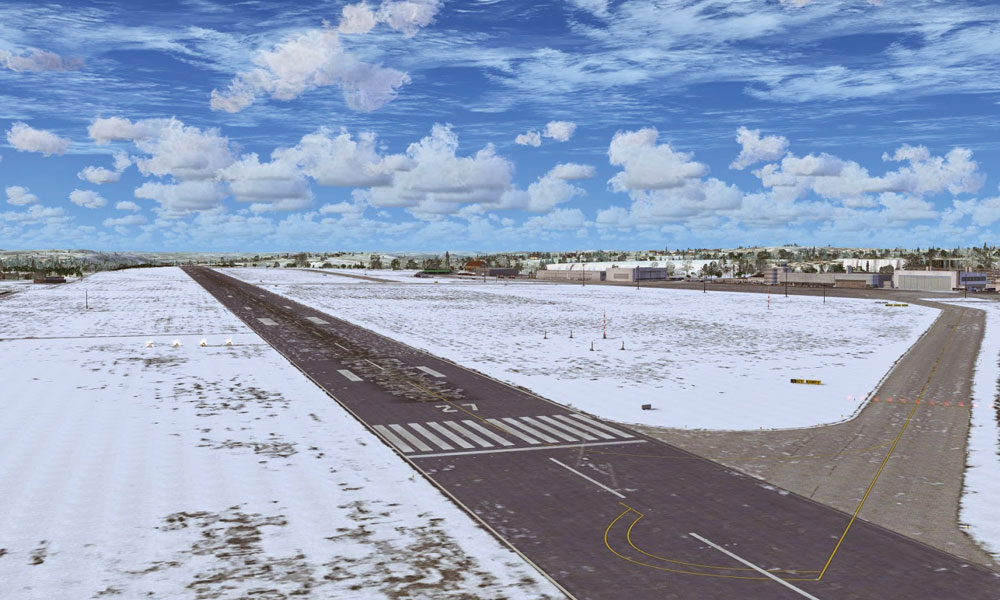 Parallel to the coastline of the Black Sea lies the Turkish airport Trabzon Airport, 180 kilometres from the Georgian border. The airport has one runway made of asphalt and is located on a plateau between the Black Sea and the road. The length of this unusual runway is 2.640 metres. The chance that you will land here is fairly small, as Trabzon Airport is mainly used for domestic flights. 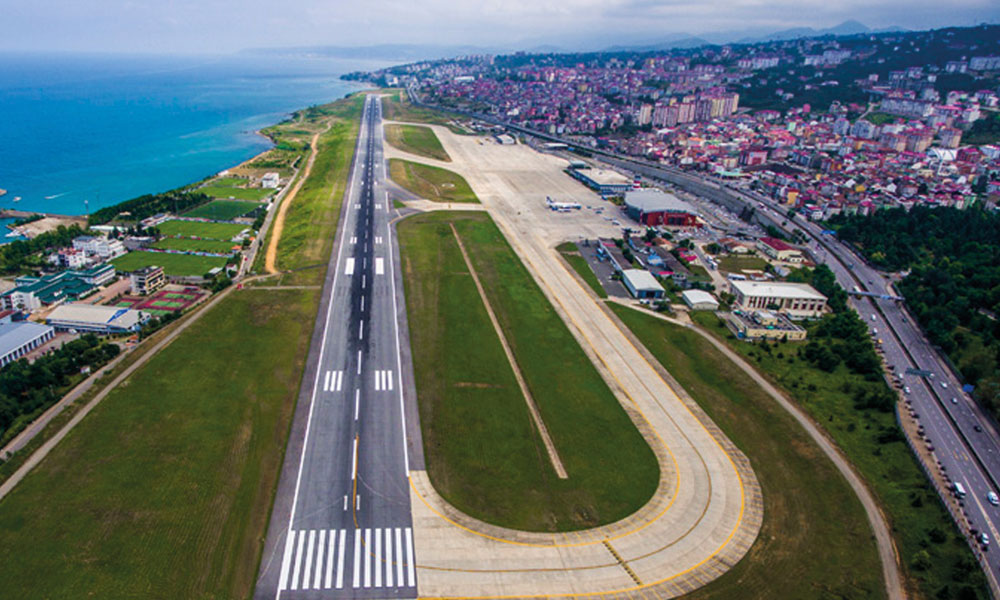